(This one is by Lucas!) Thank you very much for your prayers. Mary, Hannah and I all made it through the week, and I think we’re all still friends! We certainly couldn’t have done it without a lot of help. At the last minute, we decided to leave the four older children behind with Mary Lee (is the Roman Catholic church currently accepting applications for sainthood?) while the three of us headed for Cincinnati. Rachel came later with Asher, Brie, Justus and Jerome on Thursday morning so that the kids would have some time to play with their cousins and so that Asher and Brie could be there for their endoscopies on Friday. Joseph and Heidi Bayly were our gracious hosts.

Here’s what I entered into the calendar application on my computer for the week in Cincy:

No problem, right? Lots of breaks in the middle of the day. A few days were going to start a bit early, but not too bad. WRONG. We soon discovered rush hour traffic in Cincinnati. Joseph and Heidi live in Milford, which is on the far east side of Cincinnati. Cincinnati Children’s Hospital is located right downtown, and we needed to be there right at peak traffic times. Some couples might have made it through the week without a fight. Others wouldn’t. Ahem.

We did make it to all of our appointments on time, but we quickly learned that 2-3 appointments at Children’s constitutes a very full day. Hannah got to spend one evening out with Heidi and Kristen, which was great. Aside from that, though, we were basically running from early morning through late night every day, Monday through Thursday. And did I mention that I had the flu on Monday?

In spite of the craziness, Mary was a champ. All of the appointments from Monday through Thursday were about her, and every one of them, aside from genetics on Thursday, was an attempt to get a better understanding of why she has such trouble eating/swallowing/digesting/breathing. They took a CT scan of her chest to see if there was anything abnormal or bad, they put an “impedance probe” down her nose and into her stomach to study her reflux, they put cameras down her throat and took a bunch of pictures of her insides, etc.

In the end, they found… nothing remarkable. Everything looked good! Crazy, right? Of course, we have very mixed feelings about that. We’re delighted to hear good reports… but we also know there’s something really wrong with Mary, and we really want to know why. Like, you know, we really want to know why. So it’s discouraging to go through such an exhausting week without finding some answers. And that’s how we felt when we scurried in to our last appointment for Mary on Thursday afternoon.

The geneticist we spoke with was great, and he said some very encouraging, helpful things. He thought it likely that Mary’s trouble has a genetic cause at the bottom of it all, and so he put in an order to have her entire exome sequenced. According to this doctor, it’s the most comprehensive test that they can do right now to try and find out if Mary has a genetic disorder. That required a blood draw from all three of us so that the lab can compare Mary’s genetic code with both mine and Hannah’s. The geneticist explained that this test only reveals anything relevant around a third of the time they run it, so we’re not exactly holding our breath. But we’re still hopeful. Oh, and it will be 3-4 months before we hear the results.

Friday was our last day in Cincinnati, and it was all about Brie and Asher. Both of them were put under general anesthesia for endoscopies. Asher seemed to have no trouble at all with the procedure, and he recovered very quickly. The gas made Brie very nauseous and sick, however, and she was pretty well out of it the rest of the day. And then… she came down with the flu on Saturday. Bummer.

Still, we made it through, and we’re very thankful for God’s many blessings. And, again, we couldn’t have done it without so much love and support and prayer. Thank you!

I found their new logo very… interesting. What do you think? 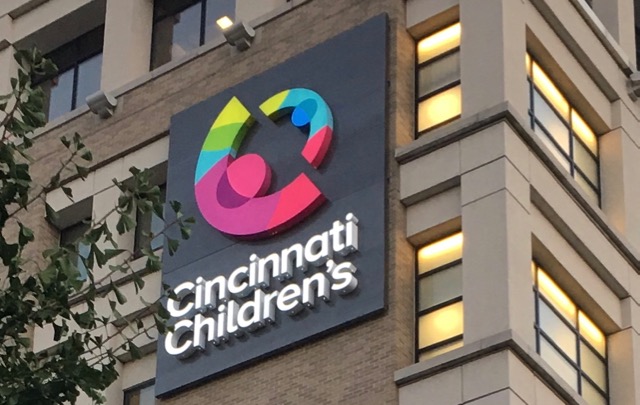 5 thoughts on “Our Week in Cincinnati”